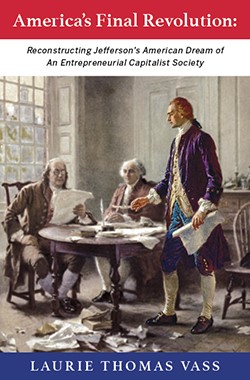 Natural rights conservatives know that something has gone terribly wrong in America. What started out as a nation full of potential and opportunity for individuals to achieve economic prosperity has turned into a nightmare of a centralized Marxist tyranny.

Our book offers a historical analysis of when, and how, Jefferson’s version of the American Dream went so wrong.

We argue that the differences between conservatives and Marxist Democrats are irreconcilable because the two visions of the American Dream are incompatible. No cultural or ideological values bind the two sides into a shared common understanding on the mission of the nation.

Rather than continuing to fight with the Democrat Marxists over a hopelessly dysfunctional government and a permanently divided society, we believe that a better idea, for conservatives, is to start over at the point in history of Jefferson’s document of 1776.

Our book is intended to begin the debate on how best to reconstruct Jefferson’s Dream of an Entrepreneurial Capitalist Society.

View our promotional video on our book.