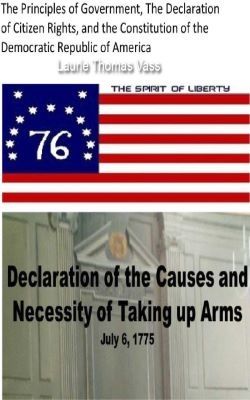 Available in eBook form at Books2Read. $10

We wrote this document to provide natural rights conservatives with a first draft of our thoughts about the new government. We consider our contribution as a first step in developing an ideology of individual liberty that vanquishes the ideology of Marxist collectivism.

Our ideology of natural rights is based upon the philosophical lineage of Locke-Jefferson-Lincoln, which we are fighting to conserve.

We begin with a confession. We believe that the Former United States of America (FUSA) ended early on the morning of November 4, 2020, when the vote counting stopped, to allow truck loads of fraudulent ballots to be counted.

We believe that the Former United States of America was overthrown by a Marxist coup that installed an unelected, illegitimate tyrant as a fake President.

This document contains the following sections:

Section 1. America’s First Founding Document: The Declaration of The Causes and Necessity of Taking Up Arms.

Section 4. The Principles of Government of the Democratic Republic of America.

Section 5. The Declaration of Citizen Rights of the Democratic Republic of America.

Section 6. The Constitution of the Democratic Republic of America.