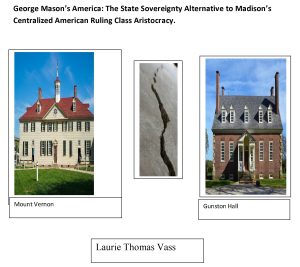 Our book is about Mason’s vision of America as an alternative to Madison’s constitutional design.

Mason  objected to Madison’s consolidated all powerful central government, and insisted that Madison’s constitution violated the spirit of liberty of the Revolution.

“Mason’s struggle with Madison and Washington over the powers in the Constitution was a fight over the meaning of political liberty, and the last real battle of the Revolution…Mason was convinced that the fundamental principles of the Revolution stood in jeopardy.” [George Mason: The Founding Father Who Gave Us The Bill of Rights, William G. Hyland, Jr., p.215.]

Our book is divided into three parts. In the first part, we explain Mason’s concept of government and contrast that with the events surrounding the Constitutional Convention of 1787.

In the second part of the book, we rely on the constitutional theory of James Buchanan to add the details of rules to Mason’s philosophy of individual freedom. Buchanan argued that there is only one unique configuration of rules that promotes the greatest rates of economic growth and a fair distribution of prosperity among citizens.

In the third part of the book, we rely on the economic theory of Joseph Schumpeter to describe the concept of how an entrepreneurial capitalist system would function, under Buchanan’s constitutional rules.

While our book is interesting as a matter of historical interpretation of the American political system, the intent of the book is not exclusively historical analysis.

Our intent is to argue that Mason’s concept of government , had it been implemented in 1787, would have been a better path for middle and working class citizens, than Madison’s framework, that ended with the agencies of government in the hands of an unelected deep state ruling class tyranny.

We further argue that Mason’s concept of individual liberty would be a better pathway back to liberty, today, after Madison’s representative republic collapsed in the election of 2020.

The value of the book’s thesis is that Mason’s concept of government, placed within Buchanan’s constitutional framework and Schumpeter’s entrepreneurial capitalist economy provides a pathway for natural rights citizens out of the Marxist Democrat Leviathan.

Natural rights conservatives know that something has gone terribly wrong in the American society and political system.

We argue that there is only one path back to liberty that begins with a civil dissolution of the United States, and the replacement of Madison’s flawed social class conflict constitution with a constitutional framework of state sovereignty, promoted by Mason, based upon individual freedom, as the purpose of the national constitution.

We begin by explaining the historical anomaly of Mason’s obscurity in scholarly documents, compared with the better known so-called “Founding Fathers.” To use a contemporary term, Mason was “cancelled” by the media of the day because he betrayed his social class allegiance to Madison’s ruling class natural aristocracy.

The fissure between Mason and the other ruling class delegates, especially with George Washington, never healed. [Peter Henriques, An Uneven Friendship, 1989].

The strategy for cancelling Mason, then, is the same strategy adopted today by the ruling class deep state that, “We are all in this together,” most recently used to promote mass citizen vaccination of the covid vax.

When Mason opposed Madison’s document, he demonstrated that he was not all in this together, with the other elites.

The success of the strategy is based upon the false idea that the interests of the wealthy families and corporations in America are the same as the middle and working classes.

The strategy was successful, then, because the ruling class had a coherent social class consciousness, while the middle and working class citizens did not.

Mason was an egalitarian who defied the social class consciousness of Madison’s natural aristocracy, and for his opposition, he was forever cancelled by the ruling class of the day.

The strategy continues to be successful, today, because the common citizens still do not have a social class awareness of their own economic interests, and Madison’s constitution left them with no political method of removing the uni-party deep state oligarchy.